A ride amongst friends.

Quickerbybiker Strat has hit upon a clever attitude to commute with.  Ride as though you know all the other road users.

No matter how smugly self-righteous you are, it's hard to always ride absolutely without aggression, without cockiness, arrogance, impatience and intolerance.

But Strat has adopted this new approach of pretending all the other road users are people he knows.  That way his behaviour has consequences in that it influences opinions of himself that he's actually bothered about.  He says it works and he behaves himself better now.


The other thing Strat said and we talked rubbish was that motorists are not people.  I think that's right too.  I try to be srupulously not anti-motorists on this site but I still think it's fair comment to say that a motorist is not a person.  They don't typically behave as people would, certainly not as friends would.
Posted by quickerbybike.com at 10:51 No comments:

Alas, the kit has not arrived.

But I'm very sorry you lot.  You've all waited very patiently having paid your money weeks and weeks ago.  It's not great.  Sorry.  Let's hope it turns up promptly after Christmas so I can get it out to you.

In the meantime, here's the best e-card I got.  I don't think Howies are saints but I think they're at least in the right direction and I know for sure I'd look a lot worse if they didn't make clothes.

Posted by quickerbybike.com at 06:07 No comments:

I've read a few of these books now and every one has been bright and engaging and funny and has taught me loads. I can't recommend them highly enough. They're only small. Very manageable.

Have a look at the list of titles. Ten-to-one you find a load of subjects you think you'd be interested in. Twenty-to-one the book turns out to be more interesting than you expected. http://www.oup.co.uk/vsi
Posted by quickerbybike.com at 01:58 No comments:

You are not stuck in traffic, you are traffic. Break free.

All those who ordered baggy shorts have now got them (except you Will) and from what I've heard you all love them.

The lycra is the bigger order by far and I had been told to expect that on the 10th December.  No sign of it yet and on chasing Endura was advised today that it will be leaving them at the end of this week.

I think I'm seeing quite a few of you next Thursday so might bring it for you all to stuff down your jerseys on the way home.  Otherwise it will be variously posted or hand delivered before Christmas.

To that end, would any of you who have not done so please email me your preferred delivery address.

Martin
Posted by quickerbybike.com at 08:55 No comments:

This one runs on fat. 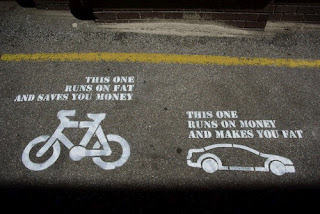 Posted by quickerbybike.com at 01:19 No comments: